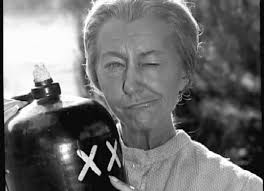 In the first installment of Crime and Punishment, I shared with you the arrest record of my Uncle Marlin, one of my great-grandfather’s younger brothers. I also speculated that the arrest had something to do with moonshine. Well, I did a bit of asking and confirmed that suspicion. According to my Aunt Madie– one of Marlin’s nieces and one of my grandfather’s younger sisters– it was a moonshining arrest. Here’s how it went down:

Apparently Marlin was an avid moonshiner, making and selling the stuff from his home. His house stood right along the road, so there was literally a market of consumers passing him by. He was so close to the road, my Aunt Madie said, that he’d often jump off of his porch, flag down passersby and sell them a bottle of moonshine.
He sold it to everyone, and one day he inadvertently offered to sell moonshine to a police officer.
As the story is told to me, Uncle Marlin didn’t try to hide his actions or deny what he was doing. “You caught me fair and square,” he told the cop.
And that’s the story behind the record.

Leave it to the Nances to provide a trail of mischief and mayhem for me to follow. I was browsing ancestry.com and noticed a database of Alabama county convict records. I figured I’d see if any of my relatives were among the incarcerated. And to my surprise, there was one of my great-grandfather’s younger brothers, Marlin, listed in a Coffee County register. It was December 1935 and he was serving a six-month term for a crime I’m not quite sure of. (That’s not commentary on his guilt or innocence– I really can’t figure out the crime. It says VCL. I have no idea what that means, but I wouldn’t be surprised if it had to do with moonshining.)

One of my great-grandfather’s younger brothers, Marlin, is among the convicts listed in this Coffee County registry. His is the last entry. He served a six-month sentence that started in December 1935. Directly above him is Macon Tindall, who I’m fairly certain was related to my great-grandmother.