A few months ago, I discovered a will that included my third great-grandfather, Aaron Bryan (later Aaron Bryant) and also listed the name of his mother and siblings. Since then, I’ve been trying to piece together this family, especially that of his mother, my fourth-great grandmother, a woman named Anarky.

The will was of Clement Bryan, a North Carolina-born farmer who later moved to Randolph County, Ga., where he owned dozens of slaves. He was killed during the Indian War, and after his death, Clement bequeathed Anarky and her children to one of his sons, Loverd Bryant, who lived in Stewart County, Ga.

I knew that Aaron and his descendants– from my great-great grandfather Crawford Bryan/Bryant, my great-grandmother Rachael Bryant, my grandmother Lula Bryant Pinkard and even my mom– all lived in Stewart County. But what about the others? What became of Anarky? Where did Jack, Tom, Rose, Louisa, Henry and Jim go?

So I began searching. 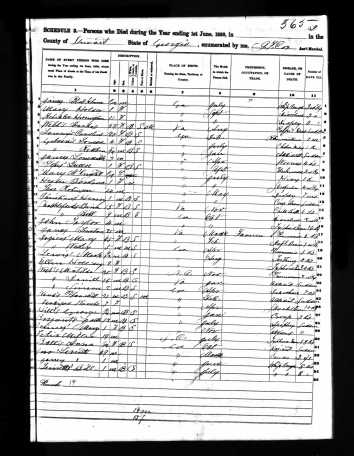 This mortality schedule shows that a 12-year-old slave named Jack belonging to a person named Bryant died of apoplexy in 1849 in Stewart County, Ga..

Jack” who died in July 1849 of apoplexy. I believe this is one of Anarky’s sons/Aaron’s brother. Before 1870, when enslaved people did not have legally recognized surnames, and were generally referred to by first name only. In legal documents, slaves were referred to as possessions of their owners, hence “Bryant’s Jack.”

I couldn’t find Rose or Tom, but there was a 51-year-old mulatto woman named Louisa Hines living next door to my great-grandfather Aaron in Stewart County in 1870. I think this could have been his sister.

This 1870 U.S. Census shows the Bryan family living in Houston County, Ga. I strongly believe these are my relatives, including my fourth-great-grandmother, a woman listed as Amy Bryan here, but formerly known as Anarky.

I have a strong hunch these may be my people! The will that listed them was dated 1839, and doing the math, Aaron, Louisa, Jack and Henry all would have been children when their master gave them to his son, Loverd Bryan, who apparently was the namesake of Henry’s son. The only thing that puzzled me was that the woman’s name was Amy. Perhaps she changed her name? Or perhaps it was changed for her.