I’m only writing this post because my ear started to burn. And it’s important to note that it was my right ear burning– which according to the body of beliefs I’ve grown up with– meant something good was being spoken about me.

Had my left ear been burning, I still would’ve posted, but I would have been sure to suggest that someone was speaking ill of me.

I wouldn’t describe myself as superstitious, per se, but there are some beliefs that I give credence to. Here are a few that I grew up with that have remained with me into adulthood:

Putting a hat on a bed; General bad luck. I’m not sure what exactly is supposed to happen, but I’m not interested in finding out.

Placing a purse on the floor: do this and you won’t have any money.

I don’t know that this next one qualifies as supersitition as much as a clever way to describe natural phenomena. Either way, here’s a saying that I’ve always found to be true:

Red sky at night, sailor’s delight; red sky at morning, sailor’s warning. This is fairly self-explanatory. A pink or reddened sky at night (or evening) is a harbinger of fair weather. But to see those colors in the morning foretells of a storm.

Did I miss any? What superstitions did you grow up with? 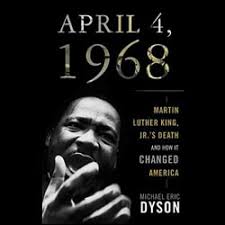 Today marks 45 years since the assassination of Martin Luther King Jr. I’ve read and re-read myriad perspectives on King’s assassination. I even interviewed the brother of James Earl Ray, who was arrested and charged with King’s death.

But I had overlooked the voices of those who lived it: my parents, both teenagers when King was assassinated. I asked what it was like, and they answered.

In the Pinkard household, three generations and three distinct reactions mostly underpinned by shock and sadness. Lula and Willie Pinkard, both children of Georgia sharecroppers; their seven-year-old son Sylvester, and their youngest daughter, my mother, who was one day shy of turning 16.

“My parents were saying it wasn’t surprising,” my mom said. “My brother? I don’t think he knew what was going on.”

As for my mom, “a quiet anger” stirred within her.  She and her classmates came of age against a backdrop of assassinations, racially charged beatings and church bombings.  And before 1968 would end, another high-profile shooting would stun the nation.

“We were sophomores then, but our little group was kind of militant anyway,” she recalled. “The Black Panther Party and Angela Davis were just coming along around this time and you had all this stuff about ‘say it loud, I’m black and I’m proud.’”

The same anger and frustration that fueled riots in large cities such as Detroit and Los Angeles prompted a focused determination to live out King’s dream and a relentless pursuit of excellence in Stewart County, Ga.

“In Lumpkin, there was nothing to tear down, so you had to go about it in another way,” she said. “You were mad at people, but you didn’t show it. You showed them that you’re not going to keep Martin Luther King’s dream from becoming a reality.”

And that’s what they did.

Meanwhile, growing tension among Tuskegee Institute students exploded into a lock-in of the school’s administration. My dad recalls three tumultuous days on campus:

I was at Tuskegee, finishing up my freshman year. There was a lot of unrest going on. We had issues with the administration. It was Founders Day and the Board of Trustees was meeting. They were in the guest hall, which is now the Kellogg Center, and the students locked them in. They wouldn’t let them out.

What issue or issues did students have toward the administration?

The attitude toward the students. There were a lot of things going on. It started in the School of Engineering; they were dissatisfied with professors. They had a lot of foreign professors and they weren’t sensitive to them. That’s how it started, back in the first semester. We had a march through campus. (Dr. King’s assassination) just added to it.

On that Saturday, the National Guard came on campus with the M16 guns. They shut down school and sent everybody home. Everybody had to reapply for admission. Some people weren’t allowed back. The TV stations and newspaper in Montgomery were there and some people had been identified. They weren’t allowed back in school.

It was touch and go because the National Guard, they were the local yokles.  Sammy Younge was a student at Tuskegee who was killed at the Greyhound Station in Tuskegee in ’66.  I wasn’t at Tuskegee at the time, but the students marched downtown. There was a statute of a Confederate soldier and they painted it black. The Guardsmen didn’t forget that. When they came on campus in ’68 they had that in the back of their minds. It could’ve been a massacre, really, if somebody had done something crazy, because they were looking for an excuse.

So where were you while all of this was going on?

(laughs) I was just going along for the ride. The guest hall, people were going in and taking food out like ham, turkey and other delicacies. Then there was this one guy Ronnie Hilton, from Pittsburgh. . . when the National Guard came on campus, they were building the chapel, so he said “Let’s go over to the chapel and get some bricks to throw.” So you had people talking about throwing bricks at folks with machine guns. So I went back to my dorm and locked up. (My sister) Sue and (her husband) Bill came and got me and took me home.

So how did all of this happen? Did it start with one student and then grow or was it organized?

It was organized. The students leaders organized it.

And all of this happened on April 4? How long did it last?

Thursday, Friday and Saturday was when the National Guard came on campus. We were home that whole week. . . We came back to complete the semester.

So aside from the campus unrest, how did Dr. King’s assassination affect students?

It was devastating. It really was. It was very upsetting. I really don’t know how to describe it. It gave you a sense of hopelessness.

How were you all able to move past it?