These are my great-grandparents, Marion and Emma Whitehurst. My paternal grandmother, Ruth Whitehurst Nance, was the youngest of their 20 children.

We’ve got something in common: One of his uncles married one of my great-grandmother’s cousins.

You know that whole six degrees of separation thing? The idea that everyone in the world is connected by six steps? Well, I’m convinced it’s true.

In this case, the six degrees of separation include marriages and bloodlines and leads us to Bobby Brown. Yes, that Bobby Brown. 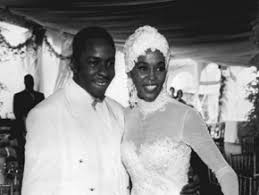 This picture is from Whitney Houston and Bobby Brown’s wedding in 1992. Charlie Mae Raines, one of my great-grandmother’s cousins, was in attendance.

The Bobby Brown connection had been casually mentioned at family reunions, and I had even heard rumblings that somebody had gone to the wedding. That somebody was Charlie Mae. From what I’m told she was close to Whitney and Bobby and Whitney would send her nice gifts at Christmastime.

I did some more researching on Charlie Mae and found out that she was born in 1921 and grew up in Enterprise. One of her brothers, Lenore, was a Korean War veteran. I know that Charlie Mae is no longer living. I don’t know when she died, but it had to have been sometime within the last 20 years.

In less than three minutes, I explain what a vital record is, how to get it and how a single death certificate helped me broaden my knowledge of my family tree.

This is my grandmother, Ruth Whitehurst Nance (left), all dolled up. I’m not sure when this photo was taken or where she was going, but it’s one of my favorites.