This is my dad, Roscoe Nance, in June 1988 at his desk. At the time he was a sportswriter at USA Today. Before arriving at USA Today in 1985, he was the first black sportswriter at a daily newspaper in Mississippi, working at the Clarion-Ledger in Jackson.

I decided to mark the last day of Black History Month with a spotlight on my dad, Roscoe Nance,the first black sportswriter to work at a daily newspaper in Mississippi.

My dad wrote his way into history in 1978, when he joined the staff of the Clarion-Ledger in Jackson.

DISCLAIMER: In true reporter fashion, I trusted the statement, but still had to verify. So I asked my dad how he knew he held this distinction.

“Well,” he said. “I knew the Clarion-Ledger had never had a black sportswriter and none of the other smaller towns would have been progressive enough to do it.”

Jackson is Mississippi’s capital and its largest city.

While at the Clarion-Ledger my dad covered the Southwestern Athletic Conference– commonly known as the SWAC– “at a time when the conference’s member institutions were largely ignored by the mainstream media.”

To say my dad is a sportswriter is correct, but that statement fails to capture the impact he had on journalism. He brought a depth and breadth to coverage of black college sports that had never before been seen. And in effect, he ended up chronicling the making of legends, such as an amazing wide receiver from Crawford, Miss., who few knew about or paid attention to: Jerry Rice.

My dad left Jackson in 1985 and joined the staff of USA Today, where he covered soccer and later on the NBA. He continued to write about black college sports and in  2007 he wrote the obituary for for Grambling State University football coach Eddie Robinson. Willie Totten (left) and Jerry Rice (right), known as the "Satellite Express" while football players at Mississippi Valley State University. My dad covered this duo while a sportswriter at the Clarion-Ledger.

Over the span of his journalism career, my dad established himself as an expert in black college sports and helped establish the SWAC Alumni Association, which recognizes and honors SWAC athletes.

I’m still floored by the fact that my dad was a trailblazer just 34 years ago–but not any less proud.  Societal change can be, and often is, very protracted. And it’s often the most unexpected people who life chooses to usher a revolution. In this case it was my dad.

A good resource for genealogical research are state departments of archives and history. Many of them have digital collections and you can click your way through hundreds of years of history.

This is my great-grandparents' marriage certificate, dated Jan. 24, 1903. Dorsey and Adline Pinkard are my mother's paternal grandparents.

In researching the maternal side of my family, I stumbled across another branch of Pinkards that lived in Randolph County, Ala. What struck me is that this branch had several men named Ike Pinkard. In fact, I came across records of at least five different Ike or Isaac Pinkards living in Georgia or Alabama:

There’s my great-great-grandfather, Ike Pinkard born in Georgia in May 1848.

My grandpa Willie had an older brother named Isaac Pinkard, who was born in 1911 and died in 1951 in Birmingham, Ala.

An Ike Pinkard who was living in Montgomery, Ala. in 1870 with his parents, Dick and Celia, and his two younger brothers, Charley and Daniel

An Isaac Pinkard who was born in 1813, married a lady named Adline and had about a dozen kids. (One of those children was also named Isaac. He later moved to Chattanooga, Tenn.) This Isaac Pinkard lived in Randolph County, Ala., and is buried in a cemetery in the Shake Rag community near Wedowee.

What’s interesting to me is that all of these men with the same names lived relatively close to each other, not far from the Chattahoochee River. Vivian Malone enters the University of Alabama, and would become the school's first black graduate. She was also one of my aunt's classmates at Alabama A&M University

You know the scene. It’s college orientation and all the incoming freshmen are herded into the auditorium. A seen-it-all, heard-it-all university administrator steps to the lectern and instructs everyone to look to their left and again to their right. In a foreshadowing tone, the administrator announces that one of those people will not be there in four years.

The prediction is almost always correct. Students leave college for myriad reasons. But as my aunt told me, one  Alabama A&M University student left the school and literally changed the course of history.

I love hearing my aunt reminisce about her college days at Alabama A&M University. A few years ago, she casually mentioned that she was a classmate of Vivian Malone, the first black graduate of the University of Alabama.

My aunt and Malone entered Alabama A&M together as freshmen in 1960. It was there that she and my aunt pledged Delta Sigma Theta Sorority. In fact, Malone was one of my aunt’s “big sisters” in 1963. Shortly after this, Malone left Huntsville for Tuscaloosa.

But no one knew the the poised, smart girl from Mobile would be walking her way into history.

“We had no idea,” my aunt recalled of Malone’s planned enrollment into the University of Alabama. “We were all glued to the television. We were very proud, but we were also very concerned because we knew what the consequences could be.” 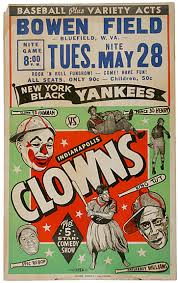 This is an ad for an exhibition game between the Indianapolis Clowns and the New York Black Yankees, two Negro American League baseball teams. My grandfather, Y.C. Nance, helped organize a similar game in Union Springs, Ala., in 1964

If you’ve ever played a game underneath the bright lights of Thornton-Foster Stadium in Bullock County, Ala., you have my grandfather to thank.

Those lights and the stadium are the vestiges of a separate-but-equal compromise made nearly 50 years ago. The stadium still exists, continuing to fulfill the steadfast commitment my grandfather made to youth sports.

My grandfather, Y.C. Nance (1916-1966) was president of the Carver High Quarterback Club, a booster club that supported high school football in Union Springs. In 1964, the group was organizing an exhibition game that would feature the Indianapolis Clowns, a Negro American League baseball team. (Side note: this team’s most notable player was home run leader Hank Aaron, who spent the early part of his baseball career with the Clowns). Scheduled to be played at night, the game would require use of a lighted stadium.

My grandfather sought permission from the Bullock County Board of Education to use Pugh Stadium, the city’s only lighted stadium. Request denied. Use of Pugh Stadium was only for the white residents of Union Springs.

Unfortunately, the game was never played. The Clowns never made their Union Springs debut and no one ever revisited the plan. Nevertheless, the city gained a showcase for some of their finest athletes.